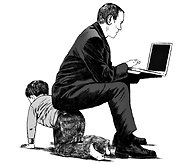 WHEN I sit with my two teenagers, and they are a million miles away, absorbed by the titillating roil of online social life, the addictive pull of video games and virtual worlds, as they stare endlessly at video clips and digital pictures of themselves and their friends, it feels like something is wrong.

No doubt my parents felt similarly about the things I did as a kid, as did my grandparents about my parents’ childhood activities. But the issues confronting parents today can’t be dismissed as mere generational prejudices. There is reason to believe that childhood itself is now in crisis.

Throughout history, societies have struggled with how to deal with children and childhood. In the United States and elsewhere, a broad-based “child saving” movement emerged in the late 19th century to combat widespread child abuse in mines, mills and factories. By the early 20th century, the “century of the child,” as a prescient book published in 1909 called it, was in full throttle. Most modern states embraced the general idea that government had a duty to protect the health, education and welfare of children. Child labor was outlawed, as were the sale and marketing of tobacco, alcohol and pornography to children. Consumer protection laws were enacted to regulate product safety and advertising aimed at children.

By the middle of the century, childhood was a robustly protected legal category. In 1959, the United Nations issued its Declaration of the Rights of the Child. Children were now legal persons; the “best interests of the child” became a touchstone for legal reform.

But the 20th century also witnessed another momentous shift, one that would ultimately threaten the welfare of children: the rise of the for-profit corporation. Lawyers, policy makers and business lobbied successfully for various rights and entitlements traditionally connected, legally, with personhood. New laws recognized corporations as legal — albeit artificial — “persons,” granting them many of the same legal rights and privileges as human beings. In an eerie parallel with the child-protective efforts, “the best interests of the corporation” was soon introduced as a legal precept.

A clash between these two newly created legal entities — children and corporations — was, perhaps, inevitable. Century-of-the-child reformers sought to resolve conflicts in favor of children. But over the last 30 years there has been a dramatic reversal: corporate interests now prevail. Deregulation, privatization, weak enforcement of existing regulations and legal and political resistance to new regulations have eroded our ability, as a society, to protect children.

Childhood obesity mounts as junk food purveyors bombard children with advertising, even at school. A recent Kaiser Family Foundation study reports that children spend more hours engaging with various electronic media — TV, games, videos and other online entertainments — than they spend in school. Much of what children watch involves violent, sexual imagery, and yet children’s media remain largely unregulated. Attempts to curb excesses — like California’s ban on the sale or rental of violent video games to minors — have been struck down by courts as free speech violations.

Another area of concern: we medicate increasing numbers of children with potentially harmful psychotropic drugs, a trend fueled in part by questionable and under-regulated pharmaceutical industry practices. In the early 2000s, for example, drug companies withheld data suggesting that such drugs were more dangerous and less effective for children and teenagers than parents had been led to believe. The law now requires “black box” warnings on those drugs’ labels, but regulators have done little more to protect children from sometimes unneeded and dangerous drug treatments.

Children today are also exposed to increasing quantities of toxic chemicals. We know that children, because their biological systems are still developing, are uniquely vulnerable to the dangers posed by many common chemical compounds. We also know that corporations often use such chemicals as key ingredients in children’s products, saturating their environments. Yet these chemicals remain in circulation, as current federal laws demand unreasonably high proof of harm before curbing a chemical’s use.

The challenge before us is to reignite the guiding ethos and practices of the century of the child. As Nelson Mandela has said, “there can be no keener revelation of a society’s soul than the way in which it treats its children.” By that measure, our current failure to provide stronger protection of children in the face of corporate-caused harm reveals a sickness in our societal soul. The good news is that we can — and should — work as citizens, through democratic channels and institutions, to bring about change.

Joel Bakan, a law professor at the University of British Columbia, is the author of “Childhood Under Siege: How Big Business Targets Children.”

A version of this op-ed appeared in print on August 22, 2011, on page A19 of the New York edition with the headline: The Kids Are Not All Right.

Childhood Under SeigeRights of the ChildThe Kids are Not All Right

We Are Hardwired To Connect

Neuroscientists have shown that our well-being depends on our connection to others. In fact, we…

The Gift of Presence in Parenting

When I was asked to promote Jane Healy’s book, I hesitated because one, I hadn’t…

Recent Posts
Recent Comments
I'm available to chat, so send me an email and we'll set up an appointment!
Get In Touch
Copyright Parentwell 2022 - All Rights Reserved
Back To Top